Everything that follows is original 2005 commentary except where noted “–RN 2012″: 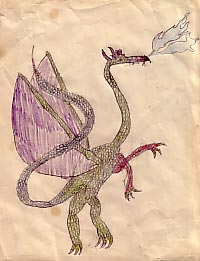 This dragon is actually based on a drawing I made when I was about nine. It hung over my bed for the longest time. I was a huge dragon buff back then. (Now I like Gryphons!) I was in the attic a few weeks ago and found the picture in a box of room decorations from our previous house, so I brought it down with me. When I was writing this story, the picture was still on my drawing board, so I decided to give the dragon a bit part. Looking at how I drew him now, a decade later, I can only think that my younger self would have been impressed. I always wanted to be able to draw dragons. I am very happy that I have gotten decent enough to do that to an extent.

At this point I started liking the Gryphon more. I wanted to show her thinking about the entire town, not just William. I wanted to collage the faces of the children and the blacksmith and the cowherd in there. As usual, I just didn’t have the room for it.

I love how she started shredding his wings, too. I always thought that would be a hazard of being a dragon. What if some knight slashed your wings? I guess that’s why dragons stayed airborne so much. Thank god they never had to encounter sawn-off shotguns in those days. *shudder*

Actually, dragons can still fly if their wings get nicked, provided that they can stitch the pieces back together (or find someone willing to do it for them!). But, there was always the chance that a stitched wing would pop open during heavy flight, much like a human mother’s old caesarian section scar may pop open during childbirth. Because of this, a stitched dragon’s flight will never be as powerful or graceful as it once was. In my day, people feared Nedja Dragons more than any other beast. They were hideous, sickly greenish-yellow and black, emaciated, with spindly, stitched up wings. They spat poison and brought disease wherever they landed. I used to take tea with a rather chirpy one.

Not shown very well here is that during the climax of the fight, the dragon sets the gryphon on fire (around 2:15 in “I Feel Loved” by Depeche Mode, if you’re following the soundtrack). While semiconscious and losing willpower, she once again remembers all the people who depend on her for their survival. She snaps out of it (2:30) and grabs onto the dragon’s exposed belly with her claws (2:40). As she begins to crawl up his body to his neck (2:45), the dragon realizes that she’s accepted death if it means she can slit his throat (2:50). He begins to whip his his neck back and forth and knock her into buildings and trees in a desperate attempt to knock her off (3:00), but she digs in and clings tight. She deals the final blow while covered in flames. It was a real brawl. –RN 2012