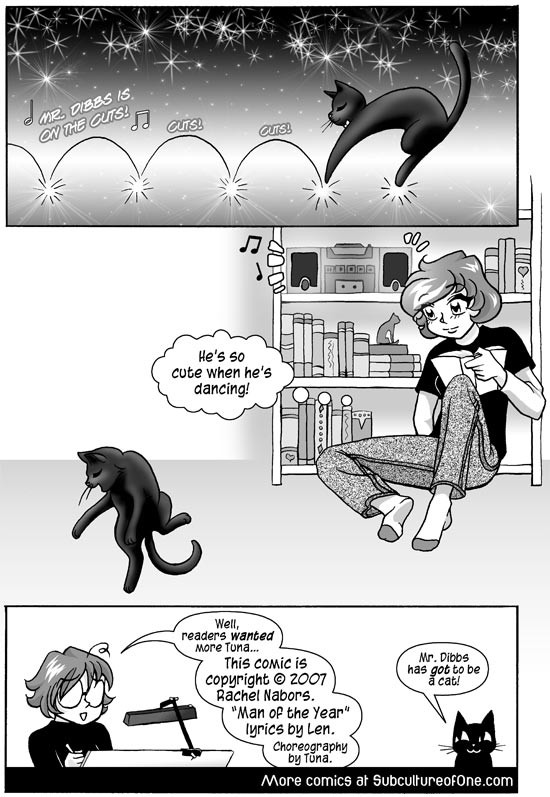 “Cats Do Dance” is a play on the title of the animated film Cats Don’t Dance.

Tuna used to get kinda crazy at times, especially at night. We called it “the midnight crazies.” He’d scamper and attack invisible prey. It looked a lot like street dancing to me. So I imagined he was privately rocking out to his favorite tunes.

I think I understood how he felt when he’d get like that. I like to run. Not long distance, just in short bursts. When I’m working on a problem or I hear a really good song, I feel like I have to run. I get up and I “scamper” back and forth in the hall or pop outside for a moment if it’s not too hot and there aren’t many neighbors about. While I’m sprinting, everything feels different. I feel fast and nimble, and what’s more, ideas, words, pictures, burst and sparkle in my head. Everything is more inspired, hard problems become easy, and ideas flood inside. It feels like a mental orgasm.

One of the hardest parts of adapting to living in “civilization” (as opposed to living in the forest as I did for my youth) is that there are so many people everywhere, and a girl walking by then bursting into a sprint for no apparent reason tends to alarm them. For this reason I find it difficult to work in offices. I get my best ideas when I’m sprinting, but there’s no private alley or hall for me to do that in without raising an eyebrow or two. So I sit, and my blood slows to mud, and I want to sleep, and I get annoyed.

I had my mother take pictures of me for photo reference for the middle panel.