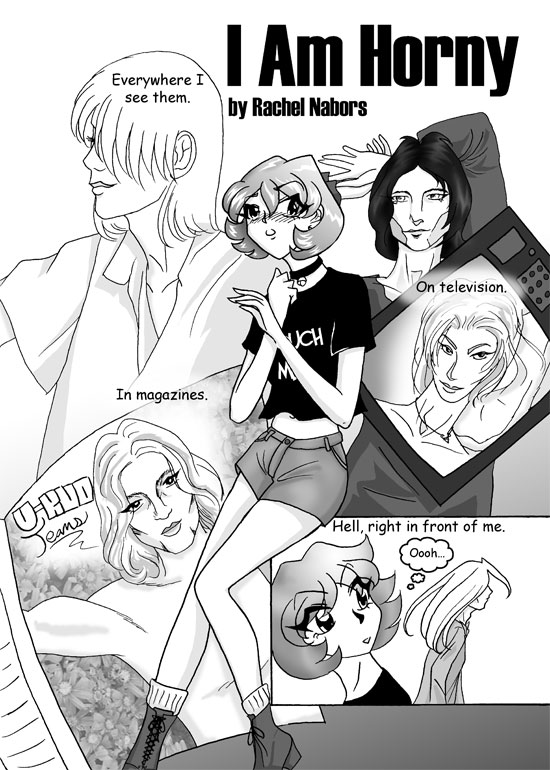 The males on this page are not too bad because I used live models and photos as reference. The dark-haired one is, obviously, based on none other than the magnificent Trent Reznor (who is still hot, even without his long flowing hair). I would not say I had a crush on Trent Reznor. It’s hard to have any real feelings for someone you’ve never met, and I was always suspicious that celebrities in person are not what you build them up to be in your mind. But I have a great admiration for him as an artist, and I did have a deep and abiding appreciation of his form, rawr.

The guy on the television (and maybe in the background) I drew using my first boyfriend as a model. I have just realized that I was drawing this while I was in my first “serious” relationship. I think it’s the last time my alter ego and I were virgins at the same time! I was going to do a plot around that, you know, having sex and coming to terms with the “you that didn’t have sex” vs. “the you that does” and owning your own sexuality and all that, but never got to it. Now the melodrama that ensues after “your first time” just doesn’t seem interesting enough to bother writing about–unless it were to make fun of how awful first times usually are–especially between two inexperienced people!

Has anyone had a good first time? Ever? I used to think that at least males would enjoy their first time, but my inquiries have often proved the opposite.

Ah well, it’s not the first time that counts. It’s the last time!