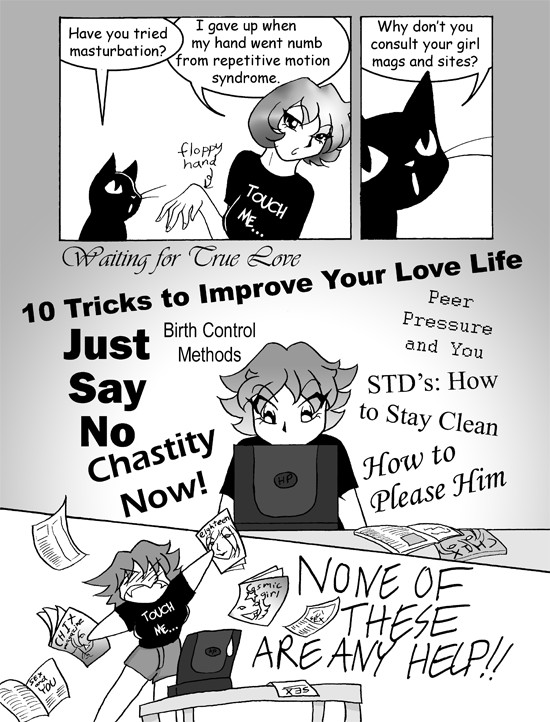 It was annoying to be bombarded by so many conflicting messages. It seemed like everyone I knew who were having sex were people I didn’t like and didn’t want to be like, because in them I saw their sexuality as a character flaw, a sign of a weak will, like they couldn’t find happiness in themselves. I lumped “loose people” with “people who can’t shut up” and “people who will be friends with people they don’t like just so they won’t feel alone.” It was their coping method, whereas I felt you should embrace your loneliness instead of looking for someone else to fill that void. I didn’t think there were people actually having sex for fun where neither party came out bearing emotional scars. Maybe if I knew then the people I know now, I would not have felt so negatively.

On the other end of the pond, there were abstinence-only promoters and fundamentalists (Christians, Muslims, Hindus–most any religion has hardcore believers who think sex interferes with your connection to the spiritual). I didn’t much care for their opinions, either. I didn’t like other people telling a girl what to do with her body, even if it was supposedly for “her own good.”

My second reason for objecting to sex (not just premarital, but sex in general) was because condoms aren’t effective at protecting people from cancer-causing HPV viruses. But, after the HPV vaccine Gardasil came out, I couldn’t see a reason not to have sex as long as you were:

In the end, I think sex is something you just need to be ready for, and when you are, make sure you take care of yourself first and foremost. Have your own best interests at heart! Don’t let anyone force you into something you aren’t ready for.