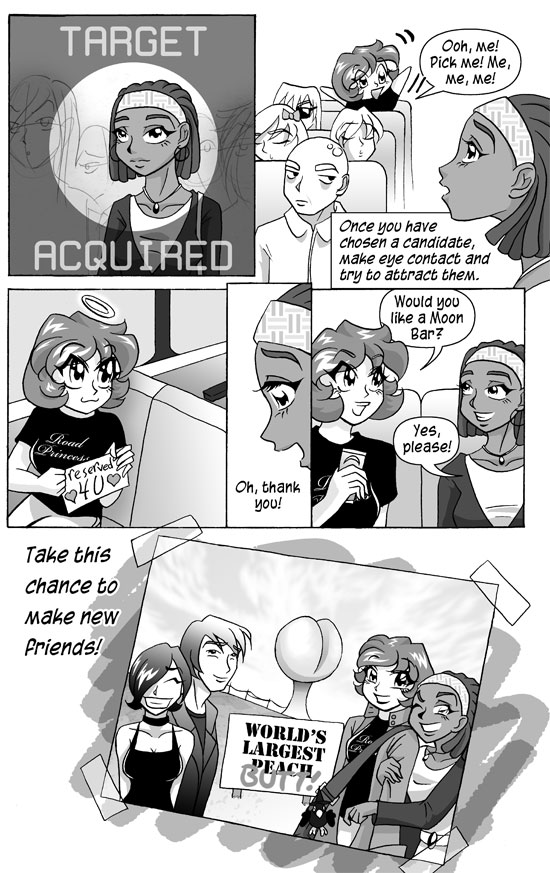 And this is the first time I ever drew an African American in my comics! I used to get letters asking, “Why are all your characters white?” My answer was that I lived in an all-white rural community, and I was writing what I knew. I felt that just “making a character black” for the sake of being all inclusive would be… I dunno, somehow doing a disservice to African American authors and comickers. I wouldn’t be writing a real African American character; I’d be writing a white character in black face. All their interactions would be pure extrapolation. That’s just not how I want to create.

But when I started making this comic, I finally had a chance to actually draw from experience! There may have only been white people on the mountain I lived on, but I interacted with all kinds of people on the bus! So I could totally make a new character extrapolated from real experiences and real people.

I was surprised how many readers noticed in the letters I got after the comic went live! I wish I could have done more like this. I hope some of those girls went on to make their own web comics.

In the comments on gURL.com, lots of girls posted they’ve seen this exact same peach. I think it’s cool that people can connect over obscure landmarks like that.

Notice how they’re all friends in the last panel. See? No hard feelings against the hawt goth girl. This is one of the happiest endings ever in my comics. Ever!