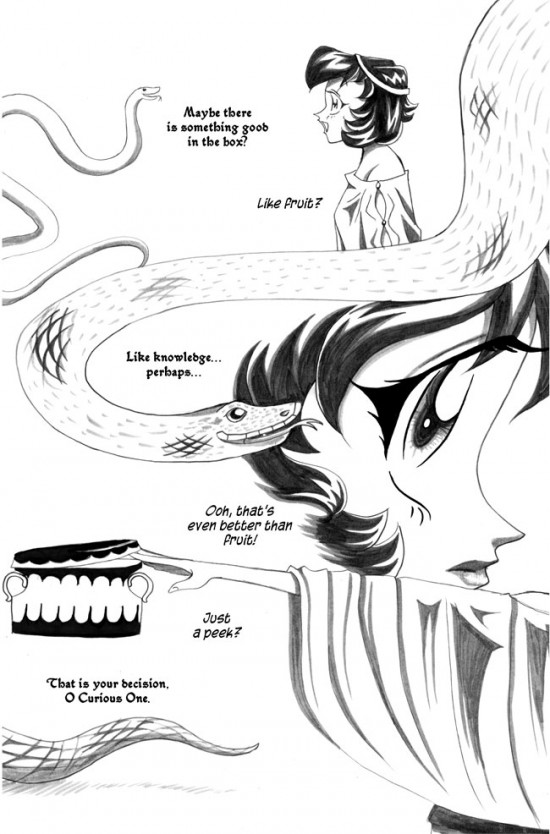 “Box” is a British euphemism for “vagina.” This word play may have been lost on my American audience.

Here I was mixing some Biblical imagery into the tale of Pandora’s Box.

In the Hebrew Bible’s creation story, the first humans, Adam and Eve, lived in a garden where their god took care of them. He told them specifically not to eat fruit from the Tree of Knowledge (because then it might occur to them to eat from the Tree of Life and become god-like). But there was this tricky serpent in the garden, definitely a Raven or a Loki type, and he was all, “Hey Eve, this is some tasty fruit. Want some?” (I think we can assume that the serpent had gorged on this fruit already and was now in full trickster mode, causing trouble for humans and gods alike.) And naturally, she shared the bounty with Adam. So when their god got back from… I dunno, working his 9 to 5 job looking after the Universe, he saw them trying to make and wear clothes. This tipped him off that they had eaten the Fruit of Knowledge because they knew they were naked!

I never got that last part. What’s wrong with being naked? Was the Tree of Knowledge dictating dress codes, too? There are humans all over the planet who go around naked or nearly so. It doesn’t make sense why Adam and Eve should have felt shame over nudity. Maybe if he’d found them constructing an H-bomb or something I’d understand. But “nudity is bad” is the only thing they gained from eating Knowledge-giving fruit? How about agriculture, writing, arithmetic, engineering? None of that is mentioned (probably because this story is older than the advent of those things). I suppose the Tree of Knowledge just made the humans more clever than the other animals in the garden, and gosh knows it’s hard to take care of clever animals. So shoo! Out they went into the real world, where, urf, they had to work for a living and stuff.