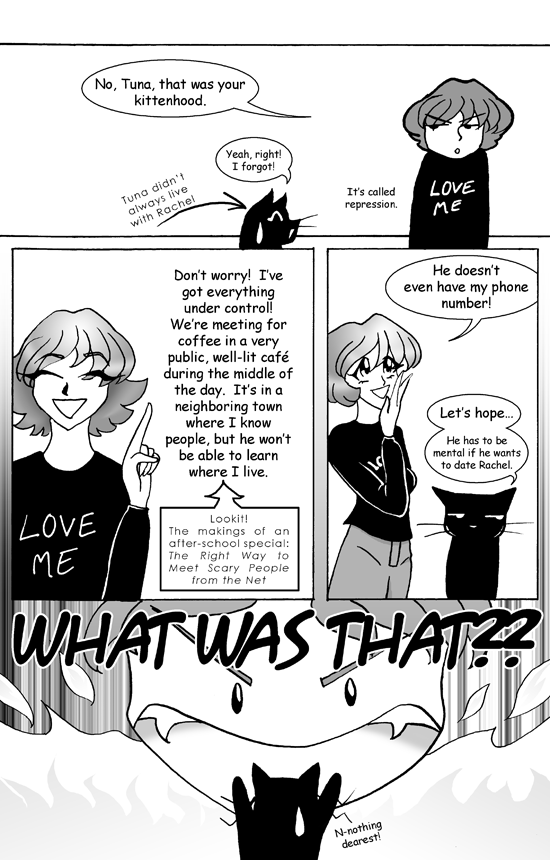 Tuna was a real cat, and he has a real story, too. He was abandoned in a box with a bunch of other kittens on the side of a road by the dairy farm where my mother worked. The box sat there for several days and no one realized there were kittens in it until someone was feeding cows and peeked inside the box they thought was a piece of trash on the side of the road.

Tuna and I got on like gangbusters. It had been several years since my first cat from the farm, Luna, died of Feline Leukemia. So I got my mom’s permission to bring him home.

He was such an awesome dude with a strong personality. On long walks in the woods, he would get tired out, but refused to let himself be carried. It was like he was saying, “I’m not weak! I can carry myself, thanks! Just watch!” And sometimes we would find him playing with the same field mouse that he repeatedly let go only to find the next day and play with again (it was strange, we even got the impression the mouse was having a laugh at him!). Of course, I once found him playing with a half-gutted field vole which I promptly dispatched. I never caught him torturing animals after that. Maybe I scared him when I finished his work for him? He knew I was angry and he looked shaken, big eyes and pert ears.

A few years later Tuna’s Feline Leukemia hit full force. All the cats at the farm had it, and once it starts taking effect, well, it’s the kiss of death. Luna was from the same farm, and it did her in in two years, too. His blood was so thin it was like water. We considered taking him to the vet to be put down like we had with Luna, but he hated the vet in the worst way, and Luna, who merely tolerated the vet, had not enjoyed her final moments. We were distressed. He was fading fast, and we wanted to help him pass on before he became miserable, but we didn’t want to torture him in the process.

A neighbor of ours had a son who was a good shot, so I asked to have him come over. The last I saw Tuna, he was curled up in his favorite field, blinking and purring in the warm sun. I still feel bad that I couldn’t bear look at him when the young man pulled the trigger. I feel like I should have been looking him in the eye when it happened, but instead I just stood there with my back to him. After I heard the shot, I turned, and Tuna was dead, but I asked the young man to shoot him again, just to make sure. The young man protested, worried about upsetting us further, but I assured him we would feel best knowing that Tuna was indeed and truly dead before we buried him.

All these years, I’ve kept Tuna in the comics even though he’s long gone because he was a such a smart, lovable cat that I can’t imagine a world without him. He would be happy to know how many devoted fans he has. I remember getting an email from a reader who worked at Hot Topic. She came to work wearing a Tuna button one day, and her little sister came in and said, “Oh, it’s Tuna!” Heh, he would have loved that. Tuna? Iconic? Totally!