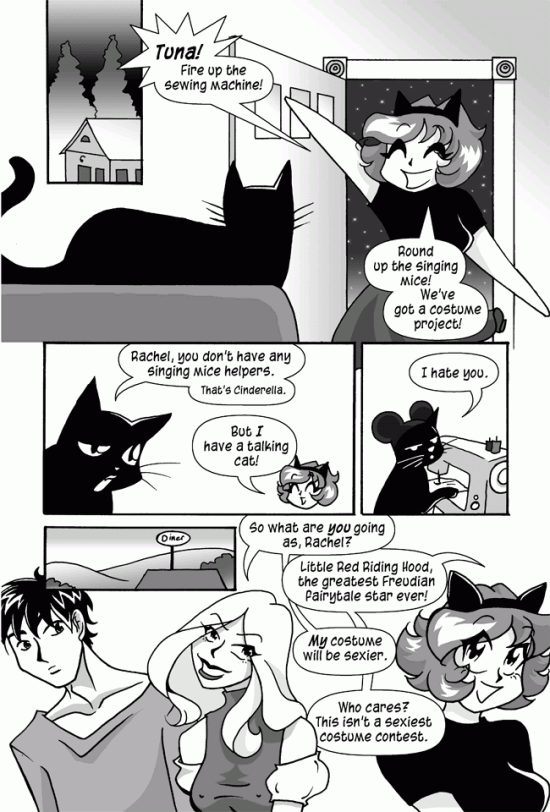 There is so much to love on this page! Tuna, the singing mouse, in what is the best one-panel gag of the season! Also, look at Bob. Look at him. Did I draw him… sexy?! Well, he’s never looked less like a douchebag!

In the summer of my sixteenth trip around our good friend the sun, I worked at a local winery’s restaurant and made some friends there. I wish I had kept better tabs on those friends. I still hear from Miah here and there. She’s so sweet! We were all sitting outside on break one day, eating lunch, talking about our Halloween costumes. I said I wished I could go as Little Red Riding Hood. (I loved the sexual undertones of that story and thought werewolves were hot long before Twilight made it so! I’m most pleased that there are so many hot werewolves to be had in pop culture these days. Mmm…)

So Miah said I should do it. So I bought the pattern and the fabric for the costume you see in this comic. And I was worried I wouldn’t have the time to finish sewing it, but then in September, the World Trade Towers fell, and, well, I had a lot of time on my hands. After the first few days I turned the TV off and just played Nine Inch Nails’s “Pretty Hate Machine” while I finished the costume.

We had really bad reception in the hollow. You could only make out vague forms and audio. It wasn’t until I was in my mid-twenties that I actually saw footage of the planes. Definitely a “wow” moment.

Miah came as a wood sprite. She looked great.